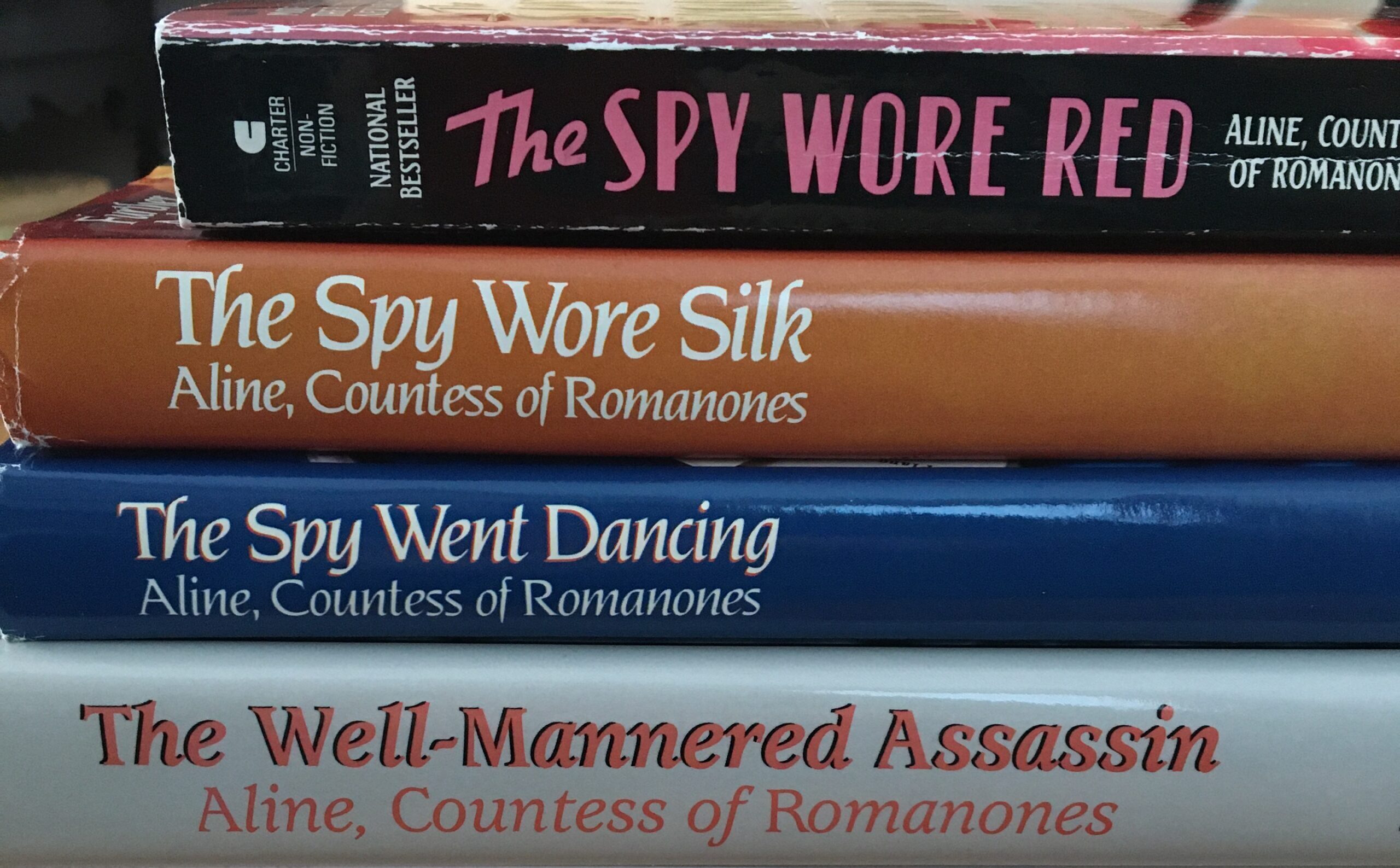 If you’ve ever read my previous blogs, you’ll know that my father’s military service during WWII was an early influence on the types of books I like to read.   While in my teens, I began reading about the WWII era and had read books by war correspondent Ernie Pyle.  Later, I moved on to spy novels by John LeCarre, Jack Higgins, and Ken Follett.

While I was working in the library at the U.S. Naval War College, I noticed a book on the shelves – The Spy Wore Red by Aline, Countess of Romanones.  This was the first book I had come across that was not only written by a woman, but it was also based on her life as an OSS agent!  (The Office of Strategic Services, a predecessor of the Central Intelligence Agency, began during World War II.   I quickly checked out the book and read it.  I loved it so much, I bought my own copy and subsequently purchased the next four books she wrote.  The Spy Wore Red, The Spy Wore Silk, and The Spy Went Dancing are labeled as memoirs; while The Well-Mannered Assassin, although based on Aline’s life, is a novel.  Aline’s last book, published in 2015, The End of an Epoch, is an autobiography of entire life, not just her years involved in espionage.

On February 9, 2021, a new book was released by Larry Loftis, The Princess Spy: The True Story of World War II Spy Aline Griffith, Countess of Romanones (New York: Atria Books, ISBN: 978-1-9821-4386-2).    Loftis compares excerpts from Aline’s books with interviews he conducted, and documents he was able to access from the National Archives and personal manuscripts and papers of other OSS agents.  Loftis found that even though labeled as memoirs, Aline’s tales were highly embellished.  Regardless, she led a fascinating life.  Aline was born in 1923 in Pearl River, New York.  The United States had already entered World War II when she graduated from college.  It was during a dinner party in 1943 that Aline was introduced to Frank Ryan, with whom she discussed her desire to serve her country as her brothers and most males her age were doing.  She didn’t realize it at the time, but Ryan was a member of the OSS, and later became her boss.  She was assigned to work in Madrid, Spain, where she met her future husband, Luis de Figueroa y Perez de Guzman, Count of Quintanilla (and later of Velayos, Romanones).  I won’t tell you everything about her – you’ll have to read these books!  I will tell you that Aline resigned from her work for the U.S. government in 1947.  She continued to live in Spain throughout her life and died in Madrid in 2017 at the age of 94.

If you’d like to read about other women who were involved in espionage during WWII, I recommend the following: